Share on facebook
Share on twitter
Share on linkedin
Share on whatsapp
Two of the best goalkeepers in the world meet again in the same stadium. Unai Simón for Athletic Bilbao and the Spanish national soccer team, and Thibaut Courtois for Real Madrid and the Belgian national team. In this article we analyse their performances, some of them decisive for the final outcome of the match. Undoubtedly, two world-class goalkeepers who, despite their imposing physique and wingspan, do not leave anyone indifferent with their tactical solvency and their unselfishness with their footwork.

With the first phases of the Copa del Rey, the teams qualified for Europe recover postponed matches of La Liga. In this case, the matchday left us with a truly great game: Real Madrid vs. Athletic Club de Bilbao at the Santiago Bernabéu stadium. No less interesting for goalkeeping lovers is the duel that took place between the goalkeepers. Unai Simón, the current starting goalkeeper of the Spanish national soccer team, against Thibaut Courtois, the undisputed starter of the Belgian national team. Both goalkeepers consecrated in the elite of world soccer leave a duel governed by the tactical sobriety in their game, the good handling of the ball with their feet and decisive performances for their teams.

Nowadays, this circumstance is much more laborious. Cataloguing or contrasting the type of goalkeeper we have in front of us is, to say the least, difficult. It is not a casual aspect that responds only and exclusively to the evolution of the sport. We have improved in the preparation of the goalkeeper at all levels and that leads us to find much more complete goalkeepers.

In this line, and as a clear example, we find the two big protagonists. Unai Simón, goalkeeper from the more than fruitful Lezama youth academy; and Thibaut Courtois, trained in the Belgian school in charge of nurturing goalkeepers in the highest European leagues, such as the Premier League. 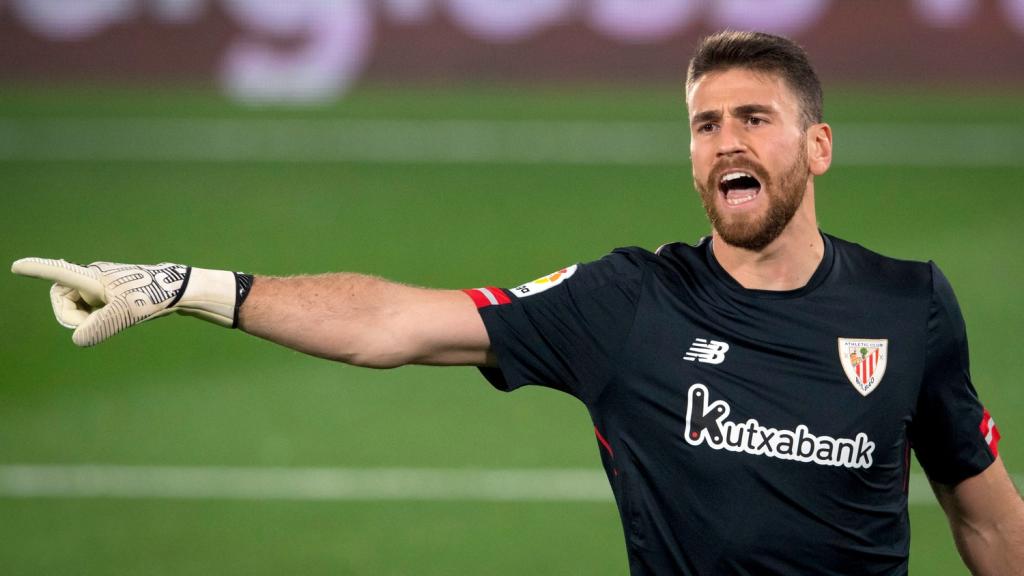 Both goalkeepers (at first glance and for their physique) could be classified as the typical big and strong goalkeepers in the air. But nothing could be further from the truth. In addition to these qualities, both are very good tactically and play perfectly with their feet. Our analysis proves it.

With an even start to the match, the passing of the minutes began to erode the physicality of the Bilbao team. Madrid took advantage of this situation to sink them in a low block and take many shots from the front of the area. In all of them we saw Unai especially resolute thanks, in our point of view, to his positional play and positioning. In the video you can see how he faces this type of shots positioned near the edge of the small area, with a high and closed positioning, with his legs shoulder width apart. Very correctly, Unai follows these tactical patterns in order to, if necessary, respond to a tight shot by taking out his leg. We see this in some of the actions.

Unfortunately, Unai makes a mistake. In the action of the goal, before the shot from the front of Marco Asensio, he fails to adjust the timing in the deflection. The deflection, as a result, remains centred allowing the second action that ends in goal. The ideal in this type of situation is to adjust the deflection in such a way that the ball takes a trajectory parallel to the back line and is lost towards the side rails.

Continuing with his performance, we see how in the final minutes, with the score against, his team turns in the opposite field. This situation generates a lot of space behind the defence that Madrid attacks with long and filtered balls. Unai, in his line of being a goalkeeper capable of everything, solved with solvency two divided balls, one inside and the other outside the area.

Courtois, on the other hand, left no one indifferent with his performance, being the best player of his team. From the start of the game and throughout the match, he showed his ability to play with his feet. In front of a high block opponent, he is capable of coming out short and finding a free teammate at all times.

Continuing with the analysis of his performance, Athletic has traditionally been a strong team in the air and they showed it in every free kick or corner. It was on a set piece that Courtois’ first decisive action was born. Faced with a perfectly executed free kick, the opposing player shot from almost inside the goal. Courtois, making use of his enormous size and a surprising reaction speed for him, reacts just in time to block the shot and luckily the rebound ends up in his hands.

This was not the only action he had to solve in the air. In one of the last plays of the match, he fisted another ball into the area after a huge challenge from the rival.

To our delight, Courtois, continuing in his line of good work, once again became a wall against a shot from the front of the area that he managed to graze and remove from the goal trajectory. In addition, halfway through the second half, he perfectly solved a 1v1 situation with the technical exquisiteness to which we are accustomed in this type of actions.

In this action we see how he prioritizes the protection of the natural post by bending his right knee and extending his left. We can also see how he positions his arms parallel to his legs creating an almost impassable wall for the striker.

It is a real pleasure to enjoy these two goalkeeping beasts in the same match. We are left with all the technical and tactical details that they leave us. Surely in future analyses and articles we will talk about them again and discover new ones. We do not stop watching the competition and the best goalkeepers to analyse and bring what is new and interesting. One of our tasks as goalkeeping coaches is to observe the competition and draw as many valid conclusions as possible.

Faster, higher and stronger thanks to footwork

The ball, the goalkeeper’s greatest enemy

The core of the goalkeeper

Your cart is currently empty.